It’s been a long time since I’ve done something truly new and foreign. Something that makes me feel like a 12 year old boy all over again. Like trying to work up the courage to kiss a girl for the first time or some other innocent little deed like that. But while the sky began to darken and take on different hues of deep blue and red on the last night of our stay in Rome I worked up the courage to try something new. I asked the girl I love to marry me. And, well, she said yes.

This had been in the works for some time now. Almost for as long as we’d been planing on going to Italy. It started with finding the perfect ring, which is actually harder than one might think as the realness of eternity lies heavy on that decision. For if you believe in this love than you also must believe that this ring will have to last a life time, and few things that we chose in life have such a permanent nature to them. Going beyond that the ring will become the symbol of your love, commitment, and style in a certain way. So you better hope you chose one that your girl loves and will be able to cherish forever.

Luckily I knew where to begin. Jade had mentioning a jewellery website that she had particularly dug one day long ago and I made sure to bury that little nugget of knowledge away for just a day like this. It was called Hart + Stone. So I decided to get into contact with whoever ran it. I quickly received an email back from Emily McPhee, the artist behind the jewellery. She was excited to hear that I had some ideas for a ring and brought her own expertise to the table as well. I knew that the ring we would land on for Jade would have to be unique and represent her life as well as our love. What came next was perhaps the most fun and cool part of this whole process. That is the small ideas we had at first began to take shape and evolve into this comprehensive real thing.

Jade has two other sisters so I wanted to work three stones into the ring somehow. Beyond that triangles are both her and my favorite shape so I wanted to get that in somehow as well. So I sent these Ideas over to Emily and she asked what kind of stones and metal I had in mind. The metal was the one thing I knew for sure, and that is silver. As all her other rings are silver and I know she’d want them all matching. For the stones I thought black would be cool for the sisters and a white stone for our love. To have contrast. At this point Emily brought in her expertise and suggested just white stones to go with the silver and have unity and simplicity throughout the ring. I took her advice and then she got to work on the sketch you see above.

The sketch is a bit rough but it brings everything we discussed and wanted to include in the ring together. It was perfect. So I gave her the green light to go ahead and make this bad boy a reality. It was also reassuring and made the time go quicker to be receiving emails from her constantly giving updates and sharing her own excitement with how the ring was coming along. Soon she told me the ring was finished and that she was sad to see it go, as it was one of her favorites she had done and had turned out more beautiful than either one of us had anticipated.

A week later the ring found it’s way to Paris France. One obstacle of the road to engagement was down. Now all I had to do was figure out the time and place.

I decided Rome would be the place to pop the question on our trip. The problem though was trying to figure out where to do it. In Rome there are a hundred great places to do such a thing. At first I debated on the Colosseum  at night or Trevi fountain by day. Those ideas didn’t last long though. I knew that being in Rome would be enough and Jade wouldn’t want some flashy or attention grabbing proposal. I knew simpler would be better. So a romantic dinner seemed the best sort of option to follow through with.

The night came and it seemed only appropriate to try my hand at a pasta, you know since we were in Italy. We ventured on down to the super market and picked up fresh ingredients to whip up a good but simple dish with a bottle of wine to compliment it. Getting back to the apartment I began the dish and she set the table out on the terrace.

The reality of what I was about to do finally began sinking in as I finished my plate and we began chatting about old memories and what a romantic city Rome was. I swallowed another glass of wine and began trying to work up my courage. It felt like I was back in high school and about to walk out onto the stage to begin a drama performance in front of a thousand people. I knew what I wanted to say but it occurred to me that I had never done this and I didn’t really know how to begin or get myself down on that one knee. It always looks easy and perfect in the movies but life has a way of being a little more difficult.

Jade I believe began to sense what I was trying to do as I babbled a little longer on the subject of love and her being the source of my happiness and inspiration. My hand fell to my side and I took a deep breath. I knew if I didn’t do it now I’d miss my chance and possibly ruin the moment. So without knowing any smoother way to do it I finished my sentence and slid down upon one knee.

Her arms found their way around my neck and said ‘Do I even have to say yes?’ We both knew her answer already and were both the happier and better for it.

It’s beyond words how it feels to be officially engaged now to the girl that I’ve been searching for for a very long time. It makes everything in the world feel a bit more right and in place. As if fate, or destiny or whatever you want to call it is really working itself out and you’re still on it’s path. The future becomes a brighter and everything a little less scary. It’s a great place to be in and we’re still both riding the high of it all.

It’s the official beginning of a new chapter, and a chapter that will shape up to be the longest of our lives together.

It wouldn’t be possible however without the support and love her family has shown me, not to mention the ridiculous amount of kindness her mother has given by taking Jade and me on all these great trips. From the beaches of Normandy to the heart of Italy. Also without the support of my sister and friends as well and their patience with me while I’m away on all these mad trips, chasing down love and fulfilling dreams. 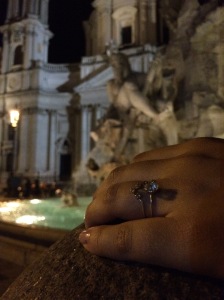 And lastly without the help of the talented artist Emily McPhee of Hart and Stone with the design and work she put in on the ring. It turned out perfect and has been a huge hit with all that have seen it. If you’re interested in checking out this artist and supporting her work please go check out her website and social medias! She does more than rings, and has an eye for art when it comes to jewellery and really capturing the simplistic beauty that the can be had in the metal.

Most importantly though my love goes out to Jade and all my excitement lies in the years that lie ahead of us. Thank you for the ride thus far, and I can’t wait for all that is to come with you!